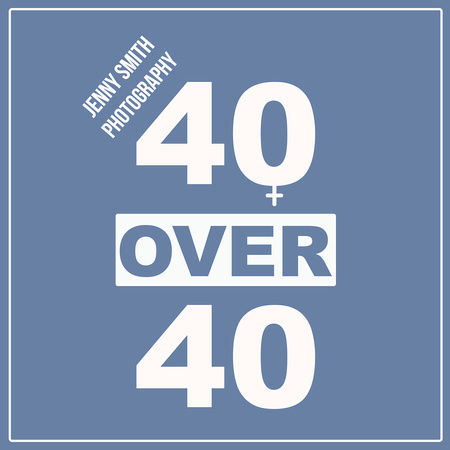 This photography project will showcase 40 incredible women all over the age of 40 who are doing incredible things for womankind.

I will photograph women who inspire me, many of whom are speaking up for the issues we face.  There will be a focus on those who are shining a light on midlife and the menopause, making this word less of a taboo and guiding other women through this turbulent time.  But there will be many more equally amazing women featured too.

I want people to see a set of beautiful, strong, older women and feel inspired.  I want young girls to see the photos and get excited about their futures, but mostly I want to say thank you to these women who are showing the world every single day that being over 40 really is just the beginning of something incredible.

I have a relaxed approach to my photography using natural light where possible and want the photographs to really reflect the women I’m shooting. Because of this many of the shoots will take place in their own homes or local area.

I’m nearly 49 years old and for the last 8 years I’ve been perimenopausal.   The fact that my computer puts a red wiggly spelling line underneath that word with ‘no guesses’ as to what I could actually mean is telling.

The red wiggly line was how I felt for many of those years, wondering what the hell was happening to me as I started getting daily headaches, waking up at 3am, forgetting why I’d walked into rooms, trailing off at the end of sentences, and worse of all getting so angry at my young son who did absolutely nothing to deserve it.  And all of this time I was running my own business, helping to care for my terminally ill father-in-law, running a household and keeping up with the to-ing and fro-ing that comes with having a child in primary school.

It was only after I stumbled across a podcast that I realised what was going on and took myself off to the doctors for HRT. And I only got prescribed that HRT because the GP in question acknowledged that I knew more about the subject than she did. Thank you Dr Louise Newson and Liz Earle for that life changing podcast.

Knowing what I know now about the effects of the menopause and the daily challenges that women in their mid-life experience, I have decided to shine a light on 40 incredible women in the only way I feel qualified to do so. And that is by taking their photograph.

What will happen to the photographs?

The 40 OVER 40 project will be published on my website and social media channels and participants will receive a photograph that they too can share to promote the project.

I would love to exhibit the photographs in some way and am having conversations as to how that could happen in light of the pandemic.

I would love for some of the photos to be featured in the press at some stage also and will of course have conversations about how the project might tie in with events such as World Menopause Day in October and International Women’s Day in March.

The photographs will only be used to publicise the 40 OVER 40 project (and in doing so shine a light on the menopause and mid life in general) unless otherwise agreed and all participants will have picture approval.

There is no guarantee of press coverage, this was never my aim.  My hope is that the women I photograph will take part  because they believe in the essence of the project rather than any coverage it might garner.  Hopefully the project will build in momentum naturally.

I want to say a huge thank you to everyone who is willing to participate.

I’m Jenny Smith, a London based portrait photographer of 14 years.  My love of photography started long before that though, when my dad allowed me to take the expensive family camera away on a school trip at the age of 10.

Before becoming a full time photographer I worked for 10 years as a publicist in TV and Radio, looking after Chris Evans on the Virgin Radio Breakfast Show and TFI Friday, Chris Tarrant at Capital Radio and finally ending up as the Head of Press for Xfm (now known as Radio X) publicising DJs such as Ricky Gervais, Stephen Merchant, Karl Pilkington, Zoe Ball and Richard Bacon.

Throughout my time in TV and Radio I worked closely with photographers and this was always the part of my job that I loved.  When I left to have my baby in 2007 I decided to pursue photography as a career and I haven’t looked back.

I am predominantly a natural light photographer and try to capture relaxed environmental portraits of my clients.  To view my headshot website click HERE.

During the first lockdown I launched the Front Door Photo Project, taking photographs of people at their front doors in return for a donation to domestic violence charity, Refuge.  This is another topic close to my heart after a friend took her own life following years of domestic abuse.  The project raised £21, 284 and also earned me a Points of Light award from the Prime Minister.

Earlier this year I launched a podcast called Dear Hormones with my friend Kate Bauss where women write in telling us about the times their hormones have got the better of them, be it puberty, PMT, pregnancy or the menopause.  It’s light hearted but with a serious message.

I am passionate about women speaking up about their issues, to make topics such as periods and the menopause less of a taboo and wanted to do my bit in allowing women to talk openly about the things they may have said or done under the influence of their hormones.  It has certainly helped me to share some of the shameful things I said and did before I started taking HRT.

I felt lost at sea when my perimenopausal symptoms struck until I found a podcast explaining what was happening to me. Dear Hormones is my way of helping other women feel less alone on their hormonal journey and hopefully help them recognise their menopausal symptoms sooner than I did and get help.